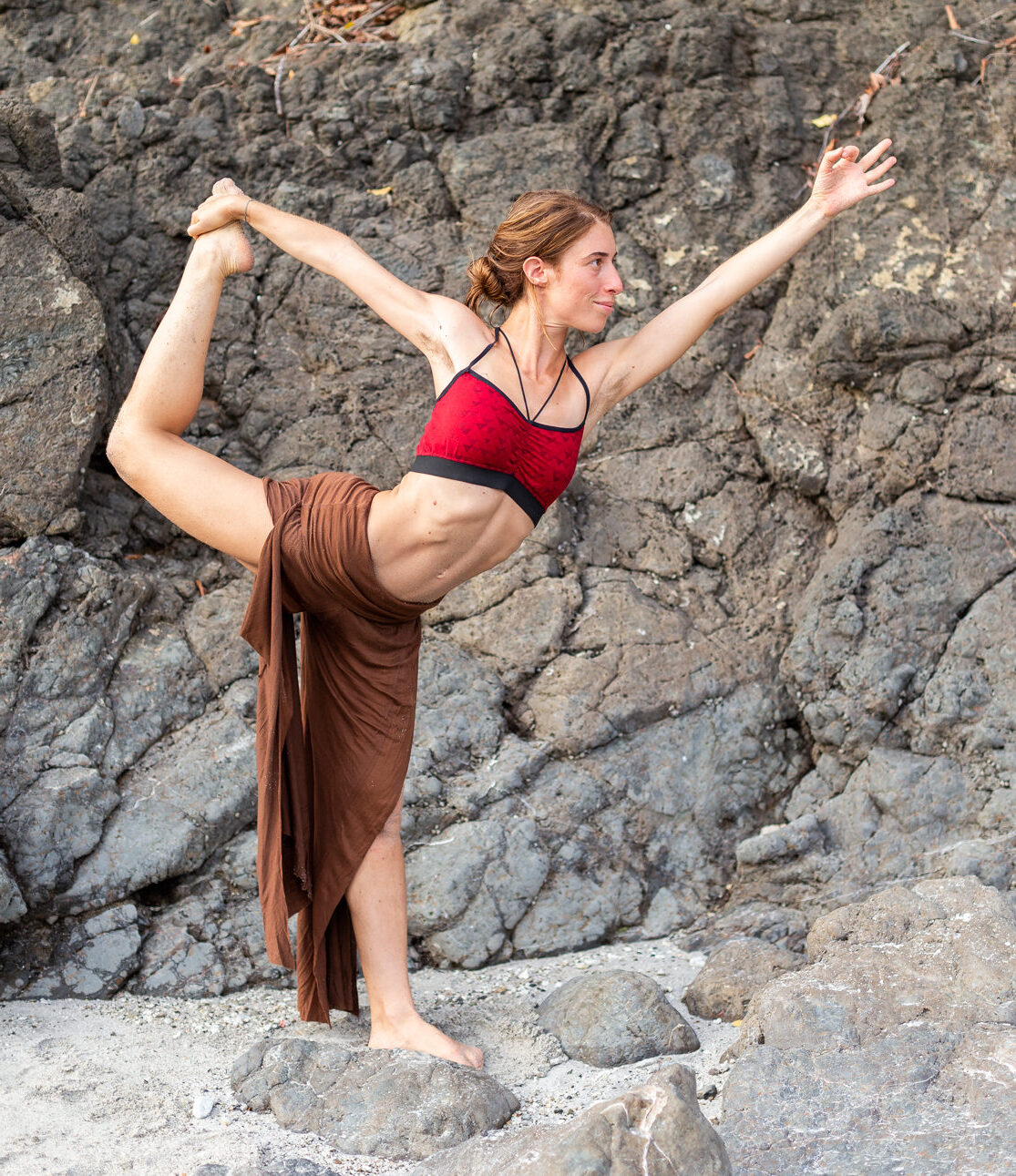 My name is Monica Gentile. My journey of embodied self-discovery started with dance at the tender age of four and the exploration has continued for more than 30 years through the fields of martial arts, movement research, Yoga, Qi Gong, and somatics.

I work professionally as a Contemporary Dancer and Choreographer, Yoga and Qi Gong Teacher, Leader and Ambassador of Laughter Yoga, and Researcher in the field of somatic movement.

Below is more information about me and my offerings. Please get in touch with any questions.

”I want to meet the other in the space of listening, awareness, beyond the thinking mind.

It is an honor to be at the service of my purpose to lead in being present to what is already there. I call it my IKIGAI.

Being aware of one's life energy gives and reveals the joy inherent in each of us.

I wake up every morning to honor this body with care, so that it can support this life that is given to me.

My deepest wish is to facilitate in people their innate ability for self-discovery, joy and creative energy.

First, let’s get to know each other with a short call, we will then discover and co-create a unique path for your own healing and self-realization: 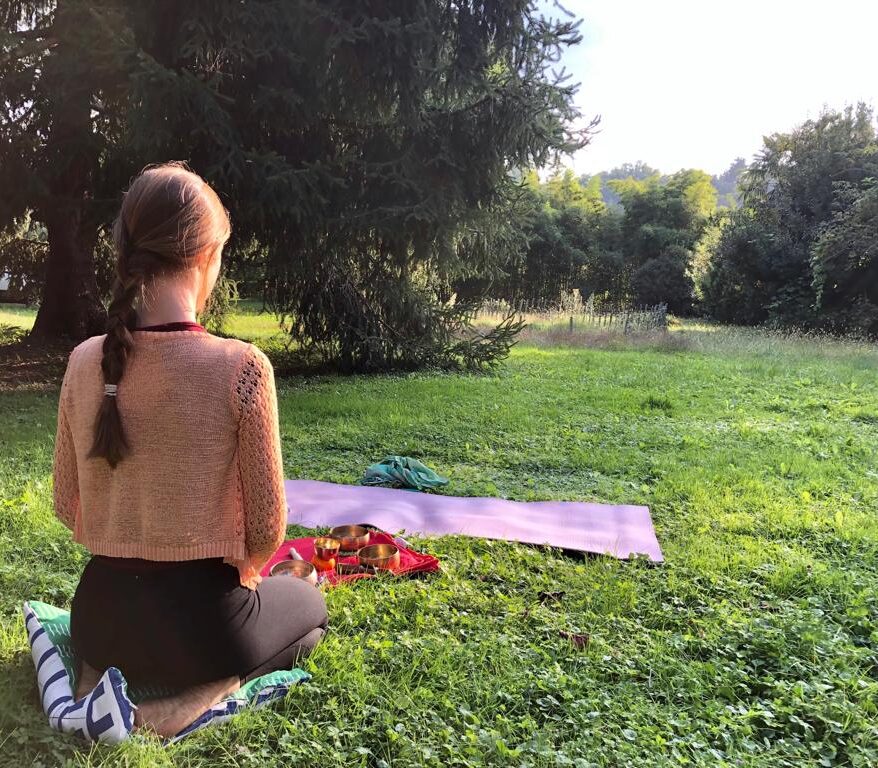 Cultivate your Innate Being before starting your day. We meet in the morning for our online session exploring practices such as meditation, unconditional laughter, chanting / singing, and other energetic practices. Session start in January 2023.

To be reborn and support vital energy: Individual online or 1-on-1 sessions recommended for those suffering from chronic fatigue, insomnia, fibromyalgia, digestive problems, motor difficulties and more.

To align the body and mind and discovery new vistas of flexibility and energy. We can arrange a one-on-one or group session, or check out my online video course of Yoga for people with back pain and stiffness (link in the menu).

A Deeper Dive About Monica

Why this "Moving Joy" practice?

I have always had a fascination with our interior world and what I call “essential”.

My journey started at the tender age of four and has continued for more than 30 years. Growing from my dance training I have been practicing Martial Arts and Yoga for more than ten years.

These rigorous disciplines have given me a “being” in the world with presence.

Being in my body I have discovered myself and discovered a way to better interact in the world.

This fascination with the body and its intricate language was my way to discover the interior that leads me to reveal and dialogue with the invisible.

My curious soul called me towards my potential following my own unique path of self-discovery.

How did you find this path?

A path parallel to the life of an artist/dancer and choreographer was that of ancient oriental disciplines and philosophies, such as Taoism and Buddhism.

Hatha Yoga, Meditation, and Qi Gong are still wonderful practices to explore the energies of the body and return to that essence that reigns in us, a space of awareness and presence.

I have practiced for years and studied to become a Teacher. On my path I have always found what was needed in times of need. An example: It was during a “gray” moment in my life that I met.

Laughter Yoga and made me discover the “art of laughing” for no reason and how to cultivate joy despite everything.

What are your values?

Thanks to so many blessings and dedication, I underand my core values which include a sense of freedom, harmony, authenticity, interiority, and simplicity.

I have observed myself to learn more about how I help myself in difficult times. What are the tools that help me to live in harmony and that strengthen my state of well-being?

I do this by cultivating Being more than Becoming: in “being” in the world with presence, I find all the nuances of freedom.

If it would be paradoxical to give a definition to freedom, differently is for harmony, authenticity, and simplicity which are those anchors that help me return to that eternal and boundless space that unites us.

Through the intention that you direct towards yourself you can reveal the harmony of your Being.

I am here to offer you a space/time to dedicate to yourself. I do this by giving light to those invisible threads that bind the external world with the interior.

By cultivating love for yourself you can give light to the quality of your life, to the question:

The body is like a Portal through which life flows, the body gives itself and we have a life to honor it, love it and we can learn to dialogue with it, listening/feeling its signals.

We learn to cultivate self-love starting from simple daily actions and rituals.

“You can love other than yourself when you start loving what you are.”

Love is not passive, it does not create expectations and responses outside of itself. In my regenerative vision, I have learned to live knowing that I am in a relation and united with the Whole.

The body in my approach is understood as the “emotional body-mind”. I want to convey the importance of the link between thoughts, sensations, emotions, and the body.

You can learn to stay in the body/mind without experiencing them as two separate entities and living aligned with that truth of your Being.

If you are here it is because you deeply desire to rediscover that joie de vivre that is your birthright. You know that somewhere inside you there is an unconditional joy, perhaps you no longer know how to recognize and express it.

By finding it again, you can live feeling prosperous and connected to everything.

Finding yourself and living in unconditional joy seems like an out-of-body experience for a select few, it is in truth in simplicity and in the return to the body that you can be rooted, find vitality, centering, and well-being to find yourself, and rejoice!

I want to help you find a dimension of yourself that is more authentic and closer to your Being, an intimate connection within yourself.

I work with you who, like me, are looking for yourself. No matter what age you are, what you do, and how you define yourself, sometimes in life, you lose the thread of your path, of why we are here and with it, the joy of living also vanishes!

“Moving Joy” is the name I gave to my approach that is taking shape, it can also mean  Joy that Moves.

It is more than just a name, it is experiencing that everything is in motion, expanding and evolving.

What is being present? Looking broadly … an expanding life …

The spiral symbol inspired me, it symbolizes this movement of expansion and growth for me.

We are cyclical beings and if we open up to what happens in nature, we can better manage our life energy and avoid feeling succumb to life.

The whole universe seems to move in a spiral, from DNA to galaxies, from the motion of cyclones to the human energy field.

It is a widespread symbol of movement, cyclicality, life, dynamism, and regeneration.

It recalls the flow of time and cycles that occur in nature.

Your offerings don't seem very "Italian". Where did these interests in Asian traditions come from?

Since I was a child I have always been fascinated by the “journey” that everyone can make within themselves … I was a little researcher of the inner world, being an only child I played a lot by myself cultivating an inner dialogue that I discovered to be very important and powerful.

Soon I also explored the world … It was the cultures and traditions of Asia that fascinated me so much, they were one of my schools of life and inspiration and still is…

I have traveled to various continents in Europe, North and Central America, North Africa, and Southeast Asia. Traveling around the world has always been a way to get to know me better.

I was reflected in the looks and expressions of people of other cultures and in the landscapes that are also emotional in which I got lost and found.

At 19, I spent a year in Australia between travel and study, during which I approached the cultures of Asia.

The Asian continent has often “called” me especially the ancient and secular philosophies such as Buddhism and Hinduism that I have seen practiced while visiting very ancient temples and monasteries in Thailand, Sri Lanka, Burma, Cambodia, India, Indonesia.

I understood and experienced the close link between art and religiosity in Asia. In Bali I dedicated myself to field research, at the time I was attending a course in the Anthropology of Asian Theaters.

Music, theater, dance are living arts within the temples of Bali and narrate epic texts such as the Mahabharata and Ramayana.

My theatrical anthropology teacher Giovanni Azzaroni pushed me to do a research on the theatrical traditions and ancient dances of Bali.

In addition to doing research, I studied those dances myself. Every morning I went to my teacher’s bamboo house deep in the forest and studied Baris male dance, and Topeng mask dance. 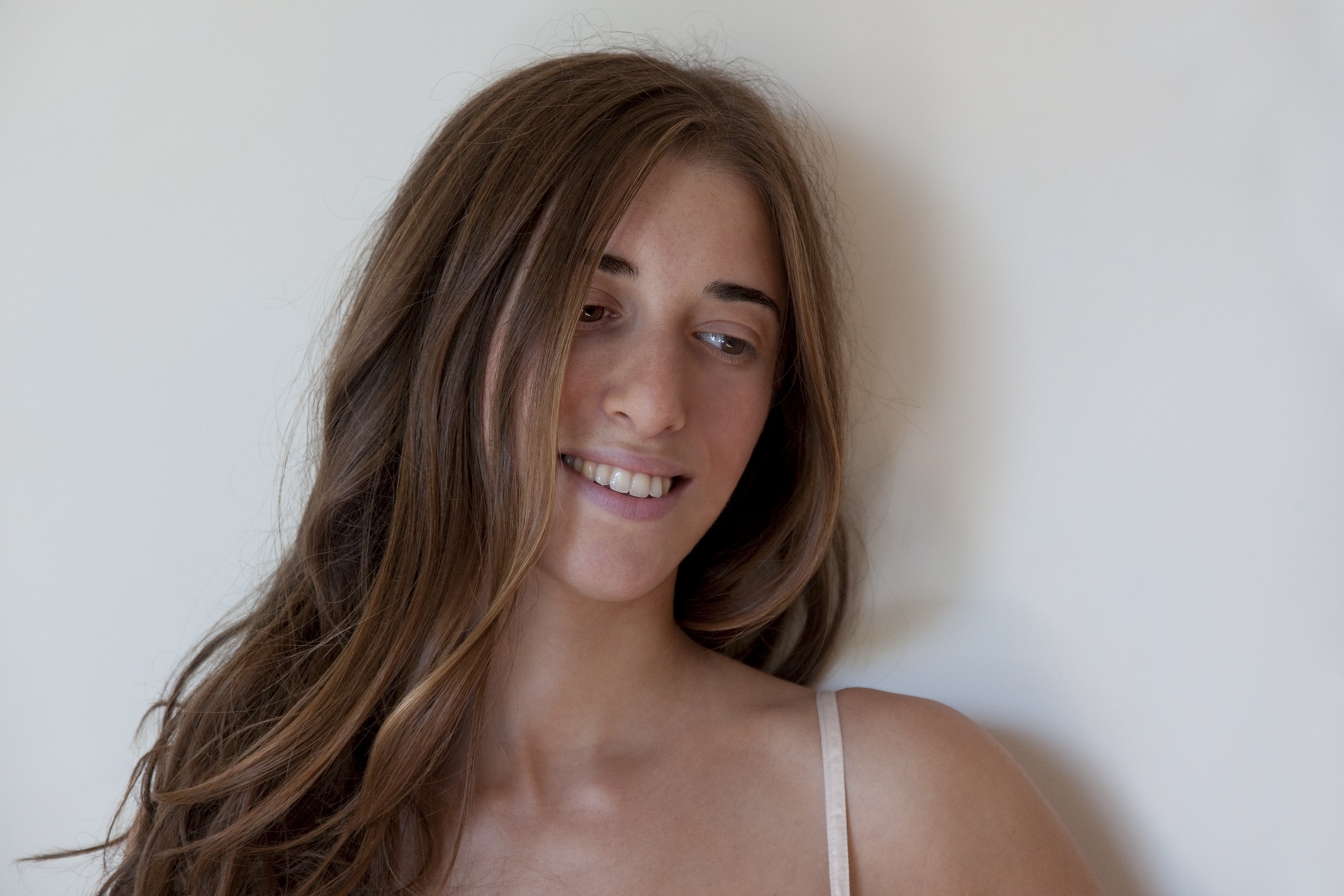 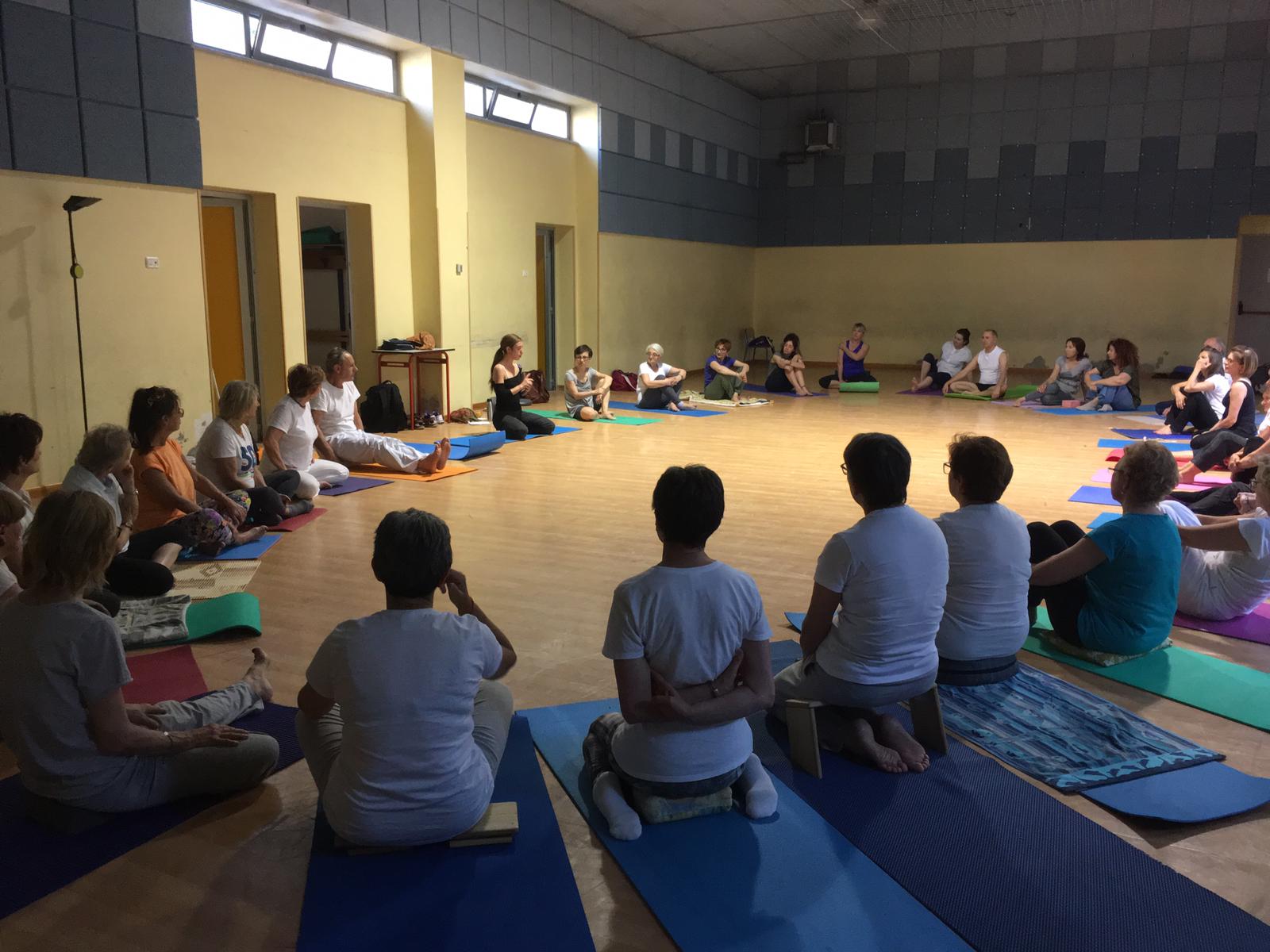 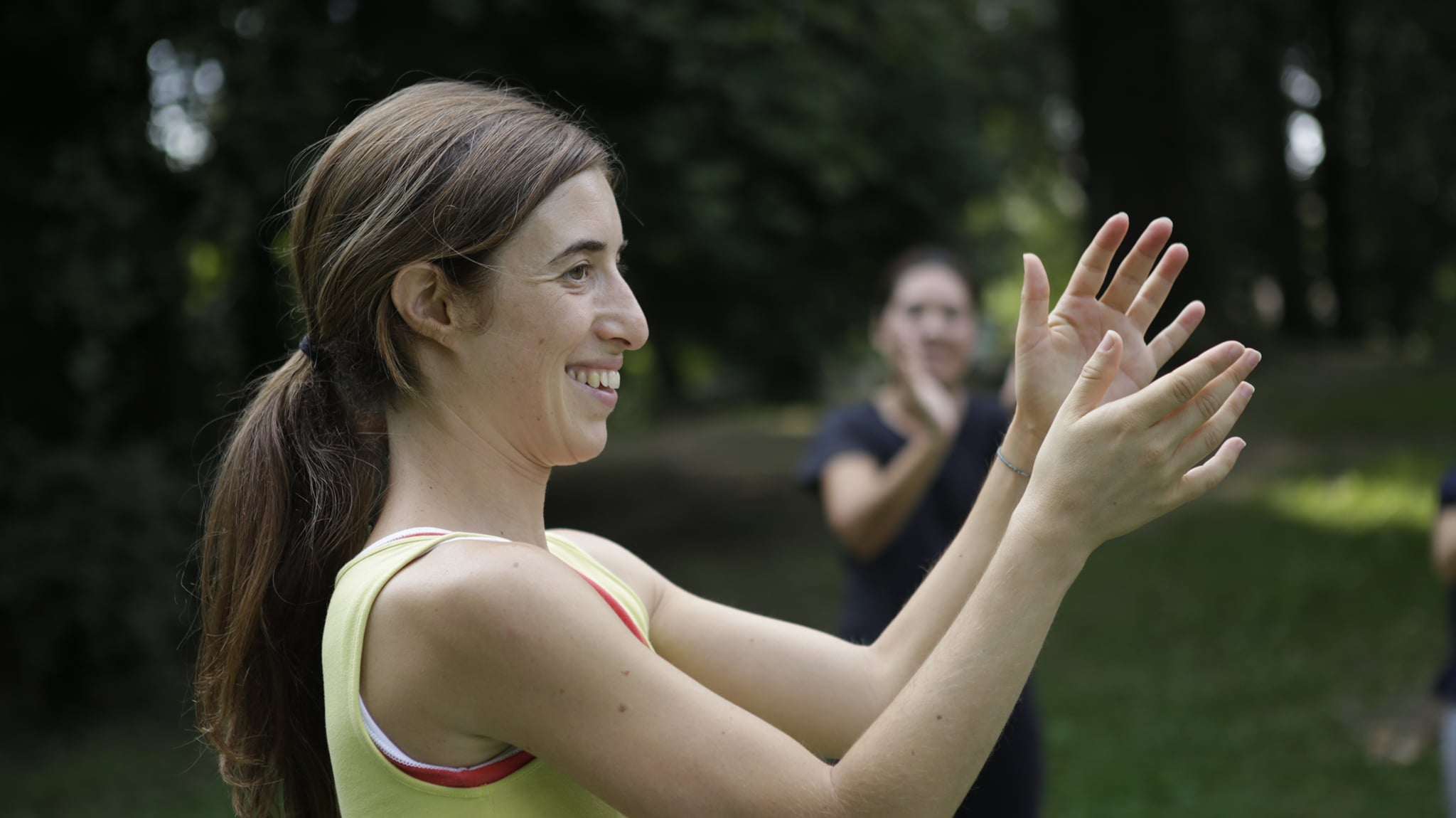